Getting to userspace - and back ! 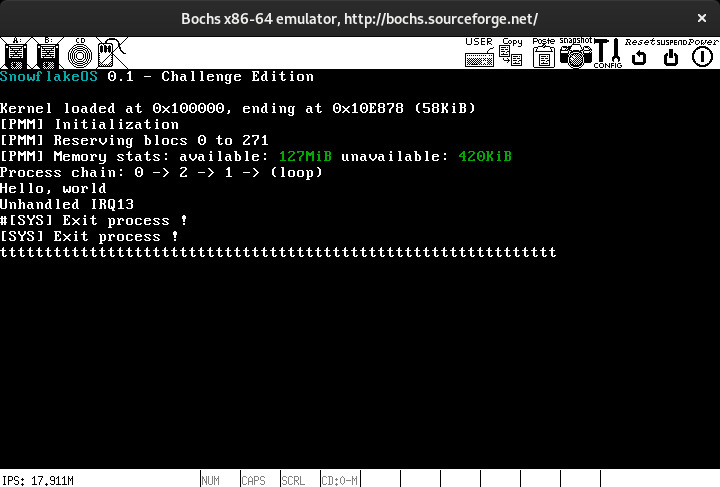 Before now, SnowflakeOS ran entirely in kernel mode, or ring 0. Now, the time has come for it to move on to better places, those of userland, also called ring 3.
The transition to having processes roam free in ring 3 was mostly made in the series of commits from here to there, and I encourage readers[1] to check them out.

Well, as of right now, a process is described by the following structure:

I’ll explain. A process consists of executable code, a stack, and an execution context. And another stack for execution in the kernel, I’ll get back to it.
The executable code along with the stack is stored in physical memory somewhere, of course, but it needs to be mapped through paging to be accessible (if only to write the code to the physical page!), so what we store is a page directory. It maps addresses 0x00000000+ to the pages containing our code, and addresses below our kernel to our stack pages. It also maps the kernel exactly as the initial kernel page directory did; it’s a copy. Notice that once the code is copied to physical memory, the page directory suffices to reference it; physical memory never moves. We only keep track of the size occupied by the code and stack, though I haven’t made these things dynamic yet, both are 4 MiB pages.

The execution context consists of basically one thing: the process’s registers, to the surprise of no one who’s written assembly before. Indeed, registers do not only include working registers like eax et al, there’s also eip storing the address of the next instruction to be executed, esp storing the stack pointer, eflags… The page directory can be considered context too, as it may hold dynamically allocated memory (not yet implemented).

Let’s switch to it

With that said, starting a process in usermode is simply a matter of switching to a correctly setup page directory, and pointing eip and esp to the right place! And resuming an interrupted process is the same, but restoring registers beforehand.
[Edit: this was a pretty poor way of resuming a process, see the next post for a better one]

The way to do these things is a bit convoluted though, as we need to iret (aka interrupt return) to our code, we can’t just jump to it, the reason being that we need to change privilege level (from 0 to 3):

How do we get back to kernel mode execution once we’ve made the jump? The answer is twofold: through syscalls and scheduling - interrupts in both cases. Because right now scheduling is handled though syscalls in SnowflakeOS, I’ll describe only those. In our kernel, calling int $48 with eax set to n triggers the nth interrupt: process execution stops, privilege changes to 0 and execution then resumes in the syscall handler. Because the kernel is mapped into our process’s address space, no page directory switch is needed here. However, one thing needs to be changed, and it’s the stack: we can’t just pollute the process’s stack, and x86 gives us (forces us to use) a mechanism to switch stack as part of the jump to ring 0. So what’s usually done, and what I did is allocating memory for a kernel stack per process, and before switching to the execution of that process, setting the “stack-to-be-switched-to” variable (in the TSS, a GDT entry) to that stack.

Right now syscall 0 is yield, and it switches execution to the process pointed to by the next pointer in the process_t structure. It’s cooperative multitasking, preemptive will come later.

In the process of implementing that, I got rid of liballoc and replaced it with a dead-simple mechanism: I now map a certain zone after the kernel, and kmalloc advances a pointer through it with each allocation. Sure, it doesn’t allow freeing memory, but it has a great advantage: the previous kmalloc needed to modify kernel page tables dynamically, and those changes aren’t automatically reflected across all copies of the initial page directory! It’s important because when context switches, for instance while in kernel mode, the previous kernel stack must remain mapped, as there are no stack switches when privilege level doesn’t change.

I’ll reintroduce a cool allocator with the userspace libc, the kernel will stay simple and only grant pages at at time to processes. I’m not sure how I’ll distribute the virtual address space, in fact, I’ll have to think about it. Same way I did the kernel heap, probably, but right in the middle of 0x0-0xC0000000.

The real fun begins now that things are in working order: syscalls!
I started with yield to get started with multitasking, and quickly implemented exit, though testing that last one took a while: I’ve spent hours debugging assembly in in Bochs to get yield to work.

Only then, I started implementing a putchar syscall. First, I needed to make my TTY work in processes, which involved mapping it somewhere; I decided to put it in my kernel heap. Tada, I can print again! I should have started by doing that, it would have made a lot of debugging easier; but then again I’ve learned a lot of assembly without it. Implementing the syscall was trivial after that, and I was able to get my first “Hello world” from userspace.
I tried my hand at a wait syscall to pause a process for some time, but I approached it the wrong way, or at least in a way that Bochs liked, but QEMU did not: waiting for time to pass in the syscall handler. In QEMU, timer interrupts don’t trigger then, so time never passes :( I’ll get back to it from a scheduler perspective.