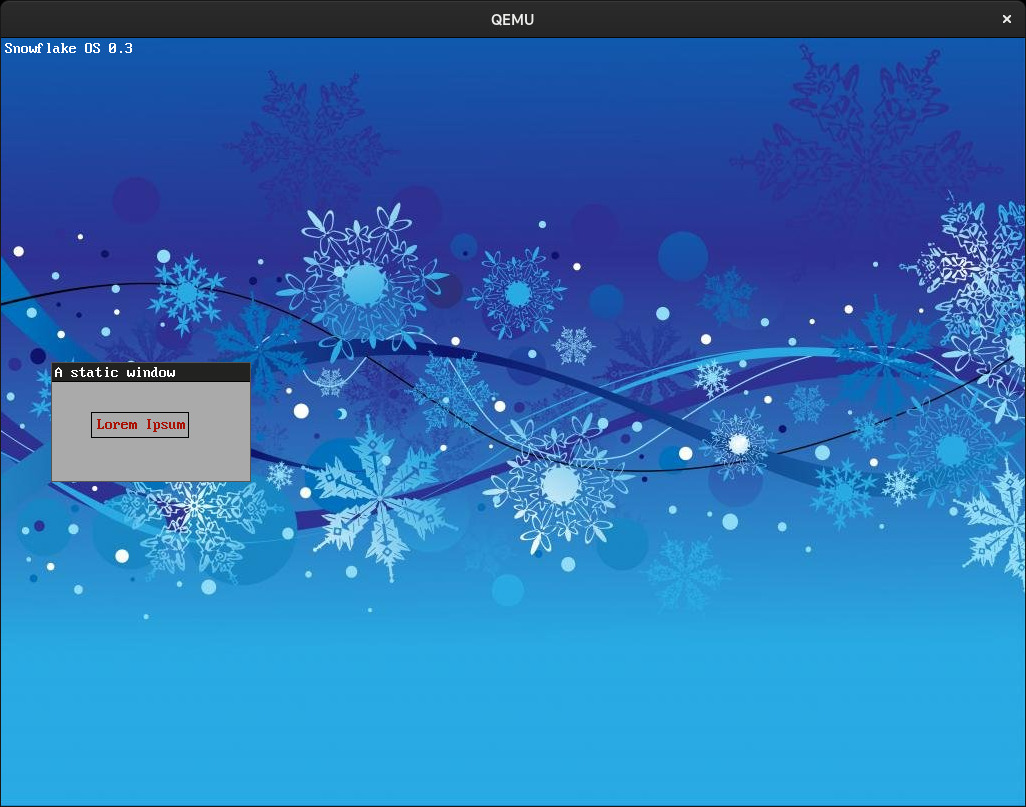 In the last post, I presented the first working version of SnowflakeOS’s window manager. While it worked, it had[1] a few important shortcomings.

WM design: simple is too simple

Here’s how it worked:

The rationale was that having the windows call the WM allowed for a single buffer per window. Performance wasn’t great either: framerate was limited by the slowest window, drawing a single frame took as many system calls as there are windows, and each window had to be copied entirely. Plus the final off-screen buffer to framebuffer copy. Last but not least, drawing in a loop when the screen doesn’t even require redrawing is plain dumb.

Since the last post, I decided I could spare the RAM to build something less outrageous, so now it works like this:

Now the screen is only refreshed as needed, in a single system call, but when it needs to be, it’s still incredibly slow. For a video mode of 1024x768x32, we’re copying at least 6 MiB per refresh. Still sort of outrageous.

Reinventing the wheel from second-hand principles

Doing a bit of searching, I found a magnificent series of blog posts by Joe Marlin[2] in which he implements a window manager from scratch in C, taking proper design and performance in consideration. Finding information about the algorithms and architecture of window managers is surprisingly difficult, which is why Joe’s posts are of such value.

One of the techniques described that I really want to implement is clipping, to avoid copying so much memory and redrawing things that haven’t changed. There’s also a neat GUI system described there, but I don’t want to have it live in the WM so I’ll make my own way there.

I’ve spent most of my development time on this item, with two outstanding bugs.

The first was a page fault occuring only when optimisations were turned when compiling the kernel. I fixed it in this commit and while the precise instruction causing the fault escaped me, I know it was a result of two things:

The second bug was with my background window (shown at the top of this post) being shifted 50 pixels to the right. Specifically, the top row began at the 51th pixel, thus shifting the rest of the image, and drawing 50 pixels past the end of the buffer. The worst is that this bug occured only with -O2 optimisations turned on, and only on bochs, not on QEMU. This made me think it had to be a memory error, caused by me triggering undefined behavior somewhere, as I had reworked my malloc implementation just before[3].
It turned out to be a lot more mundane: with optimisations on, my scheduler switched from the “background window” program ealier than in other cases, so it opened its window after the other program. Can you guess what my window-placing code does? It shifts new windows 50 pixels to the right of the last one. The first window was placed at x=0, the background at x=50.

I was rooting for a much more interesting resolution for that second bug! That’ll teach me not to make too many assumptions while debugging, and not to be okay with drawing outside buffers. And my window-placing code is now clearly marked as “radioactive garbage”.

I’ve implemented the sbrk[4] system call as a first step to get a free-able malloc implementation. It’s useful for allocating and deallocating memory after the program’s code. Handling page boudaries make the code somewhat hard to understand. If the program asks for n more bytes, do we need to allocate a new page? several? Same thing for deallocation.

For the first time[5], I spent some time reading about memory allocators, on this clear and concise site in particular. It’s pretty much a requirement for implementing clipping in my window manager, so that’s what comes next.

Finally, long-standing useless system call number 2 works, processes can sleep! Well, most of the time, there are still two issues:

Setting up the FPU isn’t entirely trivial as it’s a part of the execution context of a process that isn’t saved on task switch, so it needs special care. It’s on the shortlist though, it’s pretty important.

Notice how the wallpaper doesn’t look like a graphical glitch anymore? I picked a background, converted it to raw RGB values, stuck it in a C header with xxd -i and loaded it in the buffer of my background window. At 14 MiB of header file, it’s outright heavy, but thankfully once compiled it compresses down to around 2 MiB. A PNG parser is somewhere on my todo list :)