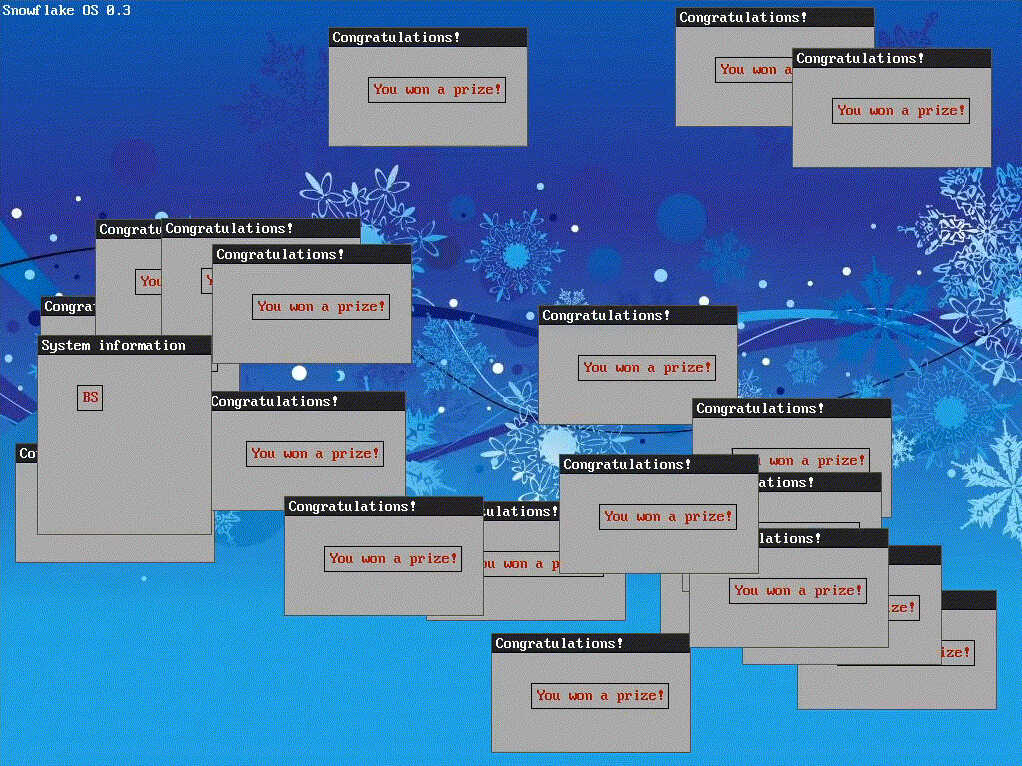 Today I’ll be writing about memory allocation, a fairly fundamental topic, perhaps one that most encounter faily early in their OS development journey. Yet I’ve only now started to really get into it, now that I feel like it’s needed. And it turned out to be fun after all!

I decided to take guidance from this post by Dmitry Soshnikov, implementing in this post only the basics, to get to a point at which I can freely call kmalloc and kfree, without throwing away too much memory. And perhaps malloc and free in userspace later?

There is some terminology to get down before diving into the details:

Our previous allocator: now too simple

Previously, SnowflakeOS used what’s called a bump allocator, i.e. an allocator that keeps track of the last block only, and that always allocates after that last block, with no means of freeing previous blocks individually.

I would’ve liked to keep that design as the implementation is concise and easy to understand, but unfortunately it’s now too simple for my use. Not being able to reuse blocks is the deal breaker here, as the window manager will have to do a lot of small and short-lived allocations, and the goal is to not to run out of memory in five seconds.

The new allocator will have to keep one feature from its predecessor, the ability to hand out addresses with a specific alignment. This is strictly needed, as we need to be able to remap a newly acquired page from our allocator, and pages boundaries are multiples of 4 KiB. See for instance this use case.

We’ll write a first-fit memory allocator that can deliver arbitrarily-aligned addresses. You can find the whole source here, and an updated version for the end of this post here.

First, our blocks are defined by the following struct. The first two members constitute the header:

That last member is what’s called a “flexible array member” in C99. It’s an array without a given dimension, i.e. we can manage its size manually by saying “I know that the memory after this struct is mine, let me access it though this member”. Here, it’ll be the pointer returned by our kmalloc function.

And secondly, we use a simple first-fit design, i.e. when allocating something, we first look through our list of blocks and see if there’s a free one that fits our criteria of size and alignment. The global algorithm is as follows:

And the “first-fit” logic is implemented in mem_find_block here, in no particular magic:

The load-bearing portion of our allocator is in the creation of blocks, in mem_new_block:

Notice that second if: as we want to support arbitrary alignment of the blocks we hand out, we want to prevent space from being wasted in between blocks, so unused blocks will be created to fill the gaps as they appear. For instance, imagine the heap is at 0x40, and a 0x1000-aligned block is requested. Then a gap of about 0x1000-0x40=0xFC0 bytes will be created between the first block and the new one. We’ll create a block there with minimum alignment to fill the gap.

Note that the pages that consitute the memory we’ll be distributing are already mapped in the kernel. That way the kernel can allocate after starting to execute in multiple page directories, without having to mirror the paging changes in each process. This is where the preallocation is done in paging.c:

Think of the (userspace) children!

Porting the allocator to userspace

Sure, the kernel and its window manager are what will be stressing memory the most for a while, and we could get away with keeping a bump allocator for our userspace malloc. That memory is freed on exit anyway. But where’s the fun in that? Can’t we adapt our code so that it works in both the kernel and in userspace?

Of course we can. We already have a build-level mechanism for that with our C library, which is built twice: once for the kernel with the _KERNEL_ preprocessor symbol defined, and a second time for userspace.

There are two things that we’ll have to adapt for userspace:

To address the first point, I added the following bit of code to the beginning of malloc:

And to address the second point, I added this distinction before calling mem_new_block:

To test that new malloc, I made a program to open and close windows continually while keeping the number of windows constant, which you can see in action above.

To be somewhat scientific, I counted the number of calls to sbrk. If everything was right, this program would call it a few times, then blocks would be reused ad infinitum.

And it did! With 20 windows, I counted 69 sbrks, and no signs of more coming up even after five minutes of frenetic window respawning.

A point on kernel/userspace interactions

It may not be clear what the code paths are for the userspace version of malloc, so I’ll detail them a bit.

When a program calls malloc, execution stays in userspace, because the allocator is in the C library linked to it, along with everything else. If malloc’s memory pool needs expansion (i.e. there’s no room to add a free block), the sbrk system call is run, and execution jumps in the kernel. That system call maps pages as needed to expand the heap of the program. The process of mapping those pages may itself involve allocating memory for the kernel to create new page tables, but in this case, the kernel calls pmm_alloc_page to get a fresh page of physical memory directly, so kmalloc is never involved.

It would have been pretty neat to have malloc call kmalloc, wouldn’t it? I like the idea of a piece of code calling another compilation of itself, anyway.

This is what putchar does, so at least such cross-source calling goodness is done somewhere. A call to putchar in userspace translates to the putchar system call which calls the kernel version of putchar, which is about two lines above the first call in the source:

When I first tested my new kernel allocator, it seemed to work fine except for one detail. The ‘w’ of “SnowflakeOS” in the top left corner of the background and in the title bar of my window looked all wrong:

And only when compiling without the nice blue background and identity mapping more pages than needed at the beginning of memory. Which I did then, otherwise I perhaps wouldn’t have spotted this bug.

I fixed it in this commit, basically by paying attention to where my GRUB modules (i.e. my programs) were in memory, and protecting that memory. Indeed, those modules were loaded right after my kernel in memory, and guess what I used that area for? The bitmap of my physical memory manager. That’s not a story a James Molloy would tell you[1].

Now I check exactly where my modules end and place my physical memory manager after that, and I identity map exactly the right number of pages to be able to copy the modules into kernel memory.

The gif at the top of this post looks somewhat okay, but it took some effort. Basically, I wanted a program that spawned N windows then closed the oldest ones and replaced them, in a loop. The first iteration of that popup-spamming program would either spawn +oo windows, or spawn N windows then get stuck in an infinite loop somewhere.

The problem, explained in this commit, was that I had failed to maintain the integrity of my doubly linked list of windows when deleting an element, and the list turned into a circular list when traversed backwards, leading to an infinite loop in wm_count_windows.

That’s it for this post, which is already far too long, too late and all over the place.
Thank you for reading till the end!